Letting Go. The Pathway to Surrender 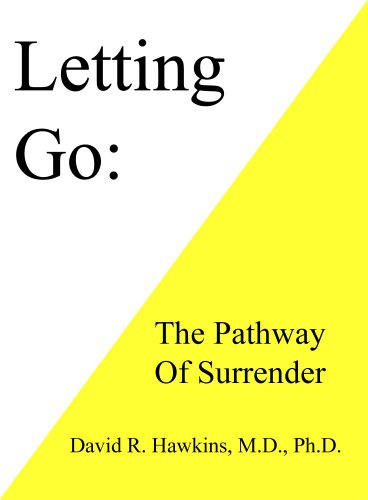 Caveat: Surrender as a way of slinking away from inner conflict

Cult leader David Hawkins (1927-2012) was himself a multiple cultist.
It did not occur to him to question and expose his own male role models

Hawkins' last guru was Lester Levenson (LL), a veritable doomsday prophet and the "founder" [actually thief and marketeer]
of the Sedona Method. LL was the direct/indirect coauthor of the 75,000-word manuscript "Letting Go" which remained unpub-
lished for more that three decades. Long after Levenson's passing in 1994 and shortly before Hawkins' own passing Dr. Fran Grace edited the "Letting Go" manuscript in 2012. She read it to then bedridden Hawkins, who nodded to it or else offered some rephrasing.

Published in October 2012, the book "Letting Go" fails to give any credit to its initiator/coauthor Lester Levenson, who himself had plagiarized the releasing methodology [Sedona Method]. Hence he fabricated a narrative which allowed him to market the Sedona Method under his name.

Following Levenson's "end times" prophecy Hawkins left his clinic, status, 2nd marriage and mansion in New York City and moved to Sedona, AZ, together with his AA companion J Randolph Richmond and ample farming equipment – to move into a house adjoined to the "survival communities" which were advocated by Levenson [the biography on Hawkins Doctor of Truth by Scott Jeffrey uses the pseudonym Sam. See chapter 14 "Out West", pp. 206/236.]
Scott Jeffrey, himself an alpha student of Hawkins for ten years, wrote in his disclosure book Power vs. Truth. Peering Behind the Teachings of David R. Hawkins (14. January 2013): "Hawkins and Levenson had a falling out over
a real estate deal [1984] and Hawkins came to believe that Levenson was solely interested in financial gain.", chapter 2 "Calibration Method", S. 59, Kinde location 1021
In Doctor of Truth, chapter 15 "Temptations", pp. 234-235 one may read that "a negative entity spoke through Sam [Levenson] claiming that it [...] was higher than both Christ and Buddha. This entity [...] began speaking through Sam, furious at the thought of not charging for the technique [SM]. [...] David witnessed that, in the presence of "demonic entities," there was a prevailing smell of rotten eggs."
Furthermore, Hawkins discovered that Levenson had committed plagiarism [theft including "spiritual rape"] on the woman, his "protege", who had originally discovered the methodology of the Sedona Method [cal. LoC 490].

Hawkins, still adhering to Levenson's teachings, fell for the erroneous concept of "letting go negative emotions" – and hence tendencially also his community/readers.
Footnote 3: "Lester Levenson, the founder of the Sedona Method, erroneously taught that people can permanently "go free"
from negative emotions by releasing the energy of these negative emotions over a period of weeks or months. [...] While we can
process through the emotions of a particular experience, we can't permanently eliminate negative emotions; they are part of our unconscious. I believe Levenson himself dissociated from his emotions and then called himself 'enlightened.' Hawkins, as a de-
voted student of Levenson for nearly a decade [1976-1984], followed suit and then incorporated this distorted understanding of emotions into his own teaching system."
"In an attempt to climb up Hawkins' scale of consciousness, it's all too easy to cut ourselves off from the qualities that partly define us as human beings – that is, our negative emotions. And when we do, we drink the same poison Hawkins did (called "delusion" in the wisdom traditions). The further we attempt to move away from these negative emotions, the more we discon-
nect from our personal shadows and our humanity. We become unloving to ourselves and we close our hearts to those that appear different from us. We shun those whose beliefs and perspectives are different from our own. Our world gets smaller
and smaller. And we become more anxious, paranoid, and afraid."
Scott Jeffrey, Power vs. Truth. Peering Behind the Teachings of David R. Hawkins, "Epilogue", S. ~234, January 2013

Himself living proof that the Sedona Method does not work, David Hawkins dissociated from his inner feminine, the dream
state, his body, emotions, and mind.
Footnote 41: "Hawkins [...] maintained his neurotic behaviors and addictive habits throughout his entire life."
Scott Jeffrey, Power vs. Truth. Peering Behind the Teachings of David R. Hawkins, Appendix C, S. ~321, January 2013

Even though Hawkins had rumbled and left cult leader Levenson after having witnessed how a profiteering entity took "possession" of him, he used Levenson's Chart of Emotions to fuse it into his own Map of Consciousness, thereby skirting possible legal hassles with litigious Levenson. Dissociated from his emotions as was his role model Levenson, Hawkins also came to view himself as "enlightened", offering a fragmentary narrative regarding his life and backing his first publication
Power vs. Force with three fabricated book endorsements.