Englische Texte – English section on Allegory of the cave

Plato's allegory of the cave 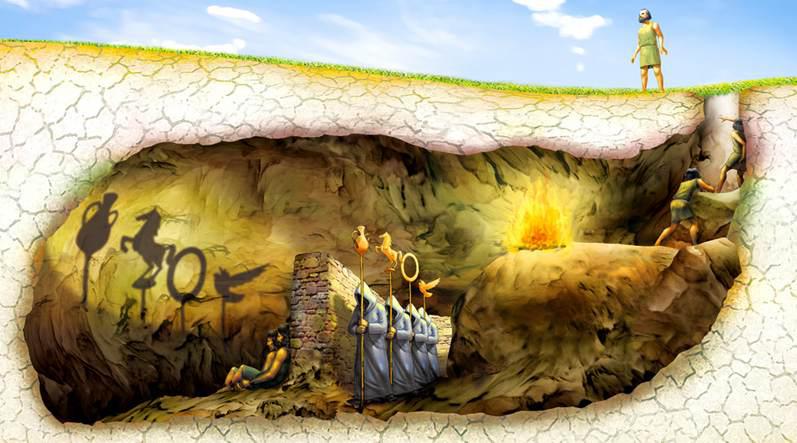 Representation of the allegory of the cave
Unable to SEE, they tend to deny facts and informa-
tion, no matter how others may point them out and ring
the alarm clock. They may even attack, ridicule, and
shame whistleblowers for daring to question their limi-
ted reality box. Looking at the world as it is and facing objective reality that goes contrary to our ingrained be-
liefs can literally cause physical discomfort.
There are various unconscious psychological mecha-
nisms that keep people in an hypnotized state because
truth and objective reality is too much too handle. The
most common one is cognitive dissonance. Most
people seek consistency in their beliefs and percep-
tions. When presented with facts or information that contradicts one's long-held beliefs that make up part of who one thinks they are, can create physical discomfort in one's body. This results in rejecting information because of the emotional trigger one experiences notwithstanding whether the information is true or not. It's a mechanical and unconscious reaction which shuts down people's ability to reason and think clearly when confronted with information that conflicts with their beliefs. […] In the extreme case, a person suffering from cognitive dissonance will verbally or physically attack the other person who is challenging his/her beliefs. Rational discus-
sion based on the information at hand is impossible if we don’t check ourselves how cognitive dissonance keeps us form staying objective.